By bus the journey from Vientiane to Savannakhet is scheduled to take 11 hours.

There is one bus service a day from Vientiane to Savannakhet which is available to book online.

Box below to buy your bus tickets from Vientiane to Savannakhet.

Bus services to Savannakhet start with a pick from any hotel in Vientiane city centre. 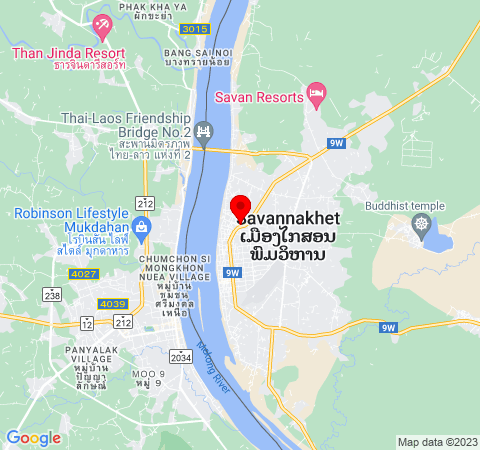 Savannakhet is one of the largest towns in Laos, with a population of over 120,000 permanent residents. Savannakhet is also the major transport hub in Southern Laos with connections to the far south of the country, a nearby border crossing to Thailand, and roads leading from the city to border crossings with Vietnam and Cambodia. Many, if not most, of the foreign visitors who come to Savannakhet are passing through on the way to somewhere else. A high proportion of the remainder of the foreign visitors who come to Savannakhet do so to visit the Royal Thai Consulate in the city to get a visa. At the present time few foreign visitors come to Savannakhet to see the city itself, which lacks the wide range of historical sites that can be found in Vientiane or Luang Prabang, or the fantastic scenery in other part so of Laos such as Vang Vieng or Nong Khiaw.

In you have time to do some sightseeing in Savannakhet the most popular places to visit are: