The Patuxai Monument is a large building, similar to the Arc de Triomphe in Paris, which is located in centre of Vientiane in Laos.

The Patuxai Monument is open from 08:00 to 16:30 from Monday to Friday, and from 08:00 to 17:00 on Saturdays and Sunday. Entrance into the monument costs 5,000 kip with tickets available at the kiosk which is located in the base of the structure.

About the Patuxai Monument

The Patuxai Monument was built between 1957 and 1968 as a memorial to the Laotians who fought in the struggle for independence from France. The name ‘Patuxai’ is derived from the Sanskrit words for gate and victory, and the name literally means ‘Victory Gate’.

Although the Patuxai Monument bears a striking resemble to the Arc de Triomphe in Paris the French played no part in it construction or design, save perhaps for the influence they had on the culture of Laos during the period of occupation. The design for the Patuxai Monument was drafted by Laotian architect Tham Sayasthsena, and has many design features associated with Laos’s culture heritage.

The Patuxai Monument has four arches, which aligned to the cardinal points, and five stupa on top of the monument which are intended to represent either the five principles of Buddhism, or the five principles of peaceful coexistence which were codified in the Panchsheel Treaty between India and China in 1954. The most striking decorative features of the Patuxai Monument are the gilded reliefs on the underside of the arches and first floor of the monument. These contain images from Laotian mythology including the half-bird, half-woman kinnaree and Erawan, the three headed elephant.

The interior of the monument has never been completed and the bare concrete rooms contain administrative offices and souvenir stalls. There are seven floor in total and this means there are lots of steps to climb, and no lift, if you want to get to the top of the building.

There are two sets of staircases leading up the first part of the roof. Those people fit and confident enough with heights to make it to the top of monument are rewarded with panoramic views of Vientiane. The Monument is located within a park with four ponds intended to signify a lotus, with the Monument being the flower in the middle. From the top of the Patuxai Monument you get a great view along the Avenue Lane Xang which ends at the Presidential Palace. For an even better view you can climb a further set of steps to the observation platform in the central stupa.

Location of the Patuxai Monument

The Patuxai Monument is located to the northern end of the Avenue Lane Xang is Vientiane. 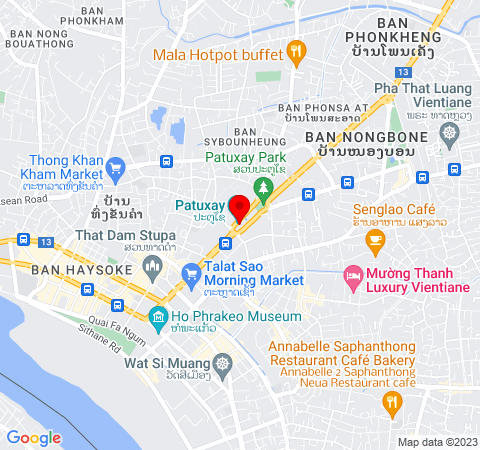