Kuang Si Falls are a three tiered series of waterfall about 40 minutes drive to the south west of Luang Prabang town centre which are very popular with foreign visitors, particularly younger visitors. The best time of year to visit the Kuang Si Falls is from December to May which is the period after the monsoon season has ended when there is still plenty of water flowing over the falls.

Some visitors go on organised tours to the Kuang Si Falls which is an expensive way to get there. The cheapest option is to take a shared taxi there, which will cost around 25,000 Laos Kip for the return journey. A disadvantage of taking a shared taxi is that the driver is likely to only allow you one or two hours at the falls before they insist on going back to town. For more flexibility you can hire a private tuk-tuk which will cost around 300,000 Laos Kip and can then agree with the driver how long you can stay as part of the deal. Entrance to the Kuang Si Falls costs 20,000 Laos Kip per person.

The largest of the waterfalls is at the top of a series of falls. This main fall has a drop of around 60 metres. To get there you can walk up a steep trail or wade through a series of pool which form under each of the falls. Swimming in the pools is the main draw of a visit to the Kuang Si Falls. The pools contain small fish which like to eat dead skin like the famous Doctor Fish treatments. The fish aren’t dangerous but it can feel disconcerting. Just beyond the entrance is a sanctuary for Asiatic black bears rescued from the Chinese medicine trade. The bile of these bears is believed by some to have special therapeutic properties.

Location of the Kuang Si Falls

Kuang Si Falls is located 29.7 km by road from the centre of Luang Prabang. 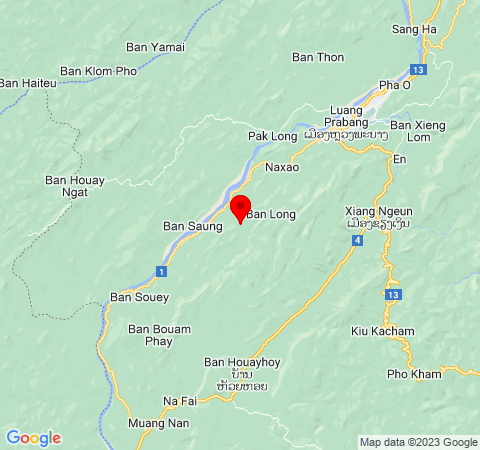